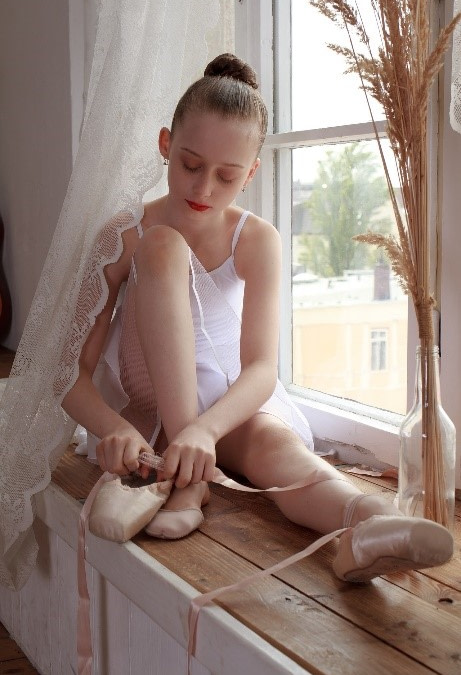 We first met Hailey when her mother, a ballet instructor, brought her in to be assessed as she was worried that a significant tibial torsion was affecting her ballet. She was also experiencing heel pain on both feet.

We performed a comprehensive paediatric assessment that showed:

Tibial torsion describes the inwards twisting of the tibia that creates an in-toeing appearance. While not uncommon in children before five years of age, this position should have corrected by nine years old. Trying to keep the foot straight means constantly externally rotating the hip, which may predispose a number of other musculoskeletal problems including hip and knee pain.

Due to the longstanding nature of the tibial torsion, its impact on Hailey’s sports performance, and her mum’s concerns with this problem, intervention was warranted.

Sever’s condition is medically known as calcaneal apophysitis and describes damage and irritation to the growth plate located at the back of the calcaneus (heel). It is not uncommon in active, growing kids and the pain is often the result of tight calf musculature pulling at the back of the heel near the vulnerable growth plate.

While many kids may experience Sever’s at some point during their growth, particularly at ages 8 – 14, they do not have to put up with the pain or wait it out, as it may take months or years to resolve.

To effectively and successfully treat tibial torsion, we need to address not just the tibial alignment but all of the related muscles and ligaments to facilitate the positional shift. Managing Sever’s involves working on the calves and calcaneal insertion to address the cause and alleviate the pain, as well as reduce the likelihood of the pain returning.

Hailey’s heel pain gradually decreased over six weeks after her orthotics were issued and completely resolved by her two-month check.

Twelve months after initially coming to see us, there was a marked improvement in Hailey’s tibial torsion, and the foot appeared ‘normal’ and correctly aligned. Hailey’s mum noticed a significant difference in her ballet and the way that she was able to perform her movements.

It has now been two years since we first met Hailey and she has not had any more pain. We performed a hip assessment at the two-year mark and Hailey’s results were all within normal limits. Our team, Hailey and her mum were all very pleased.

This sounds like it could be my child, what do I do? Don’t, worry we’re here to help! Give us a call on 9878 4566 to book in for an initial assessment or fill in our appointment form on our website www.melbournewalkingclinic.com.au and we’ll get back to you shortly